Olive Branch student seeks to serve her country in the U.S. Navy 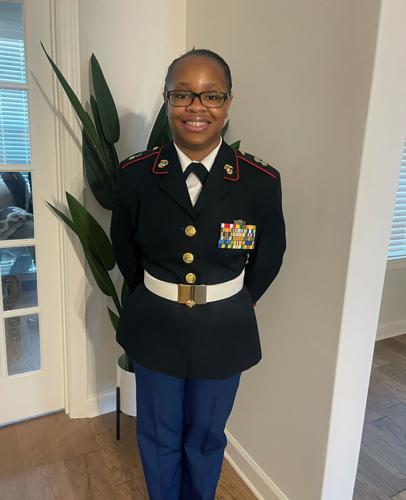 The Newport, RI, based school will prepare her to become a professional officer of competence, character, and compassion in the U.S. Navy or Marine Corps.

The chance to serve her country has been a dream of hers since she was inspired by her dad.

“My Dad did 23 years in the Navy and retired as a chief,” Gray said. “Watching him grow and succeed inspired me to do the same. I expressed my interest in the Navy and my dad immediately insisted that I go the officer route. One of my dad’s coworkers informed him about the Naval Academy.”

To apply for the academy, Gray needed to self-reflect on her life choices. Something as simple as eating habits could affect her chances.

“Once I was selected as a candidate, I immediately started getting into the application process,” Gray said. “Overall, the application process was really stressful and rigorous. I really had to stay on top of my stuff unless I would miss a certain deadline with my nominations. I even had to change things about my life that I never would have thought I had to do, such as changing my eating habits and exercising more.”

Maj. Robert Boyero, senior Marine instructor for OBHS MCJROTC, said Gray has stood out in her pursuit of domestic service to her country.

“I’ve been working with her for the past three years now. Our class is called Leadership Education, where we teach the cadets about Marine Corps history, customs and courtesies. We teach them basic leadership styles, how to lead, and become good citizens. She is in her fourth year Leadership Education program. She’s finishing up as a senior. She applied to the Naval Academy last year and was accepted,” Boyero explained. “She’ll attend the prep school for a year and then once she graduates she goes right into the Naval Academy. I believe that will make her class of 2027 graduating from the Naval Academy.”

Boyero, who served 30 years in the U.S. Marine Corps from 1985 to 2015, helped prepare Gray for the physical aspects, along with instructor Chris McGinnis.

The MCJROTC program at OBHS has teams for Drill (armed & unarmed), Color Guard, Marksmanship and Physical Training. All aspects that prepare students for further training.

Naval Academy students are midshipmen on active duty in the U.S. Navy. After prep school Gray will attend the United States Naval Academy in Annapolis, MD. A six-year commitment to either the U.S. Navy or Marine Corps is required.

“She’s excelled quite a bit, served as an officer on the ROTC cadet staff,” Boyero said. “She was a supply officer for the past two years now.  She is one of the main senior cadets that’s responsible for everything we do here, every event, competition, community service event or a fundraiser. She’s been a part of organizing and executing those.”

Gray has been active on her school’s soccer team and choir. She soon realized she had to phase out extracurricular activities to increase focus on her application process.

“There were even things that I had to kind of let go of,” Gray said. “My soccer season was coming to an end and I realized that it was really time to lay off of soccer because the Naval Academy was more important. I know what I was getting into but I didn’t realize what kind of qualities and expectations the Naval Academy expects of you. However, I’m happy that I met those requirements thanks to the encouragement from my family, friends, and rotc instructors Major Boyero and Gunnery Sergeant McGinnis.”

Boyero said each student’s determination to pursue military life is all up to them.

“These kids that are interested in things like this, they’re on their own,” Boyero said. “If they want it, then they’ll do the work to get it done. There’s a lot of paperwork, medical documentation, academic documentation, hours of community service, if they’re involved in athletics.”

Gray said her future lies on the surface of the oceans.

“I plan to major in chemistry at the Naval Academy,” Gray explained. “Once I complete my time there, I plan to be a surface warfare officer in the Navy.”